Syllables are important building blocks of speech. They occur at a rate between 4 and 8 Hz, corresponding to the theta frequency range of neural activity in the cerebral cortex. When listening to speech, the theta activity becomes aligned to the syllabic rhythm, presumably aiding in parsing a speech signal into distinct syllables. However, this neural activity cannot only be influenced by sound, but also by somatosensory information. Here, we show that the presentation of vibrotactile signals at the syllabic rate can enhance the comprehension of speech in background noise. We further provide evidence that this multisensory enhancement of speech comprehension reflects the multisensory integration of auditory and tactile information in the auditory cortex.

Drug transport in the cochlea through steady streaming 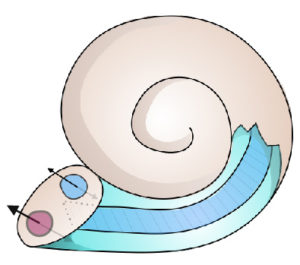 The mechanosensitive hair cells in the inner ear, or cochlea, are vulnerable to overstimulation, which can cause damage to the cells and sensorineural hearing loss. Pharmacological treatments to prevent hair cell damage or to restore the cells’ function after impairment are currently being developed. However, transporting the drugs to the hair cells has remained a major problem because the function of the cells relies on the intact encasing in the hard temporal bone. Here we show that steady streaming, a physical phenomenon that accompanies propagating waves, can be employed to transprt drugs from an entry point near the middle ear to the hair cells inside the cochlea.

Enhancement of speech-in-noise comprehension through neurostimulation 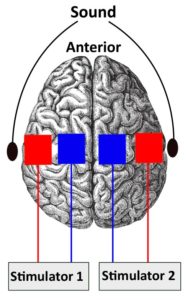 Transcranial current stimulation can influence neuronal activity. As a striking example, current stimulation paired to a speech signal, with the current following the speech envelope, can influence the comprehension of speech in background noise. The speech envelope is thereby a slowly-varing signal with frequency contributions that lie mostly in the delta and in the theta frequency bands. Here we show that the modulation of speech comprehension results from the theta band, but not from the delta band. Moreover, we find that the theta-band stimulation without an additional phase shift improves the speech comprehension as compared to a sham stimulus. 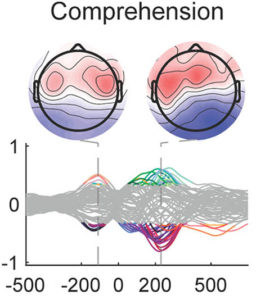 If hearing aids could measure how well a wearer understands speech, they might be able to optimize and adapt their signal processing to enable the best user experience. Hearing aids can potentially measure brain responses to speech from electrodes, but how this can inform on speech comprehension has remained unclear. Here we report significant progress on this issue. By combining machine learing with an experimental paradigm that allows to disentable lower-level acoustic brain responses from neural correlates of the higher-level speech comprehension, we show that speech comprehension can be decoded from scalp recordings.

O. Etard and T. Reichenbach,
Neural speech tracking in the theta and in the delta frequency band differentially encode clarity and comprehension of speech in noise,
J. Neurosci. 39:5750 (2019). [pdf]

Decoding attention to speech from the brainstem response to speech 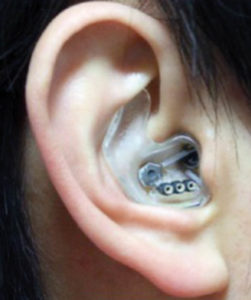 We are often faced with high noise levels: in a busy pub or restaurant, for instance, many conversations occur simultaneously. People with hearing impairment typically find it difficult to follow a particular conversation, even when they use hearing aids. Current aids do indeed amplify all the surrounding sounds, not only the target. If a hearing aid could know which speaker a user aims to listen to, it could amplify that voice in particular and reduce background noise. Here we show that a hearing aid can potentially gain knowedlege of a user’s attentional focus from measuring the auditory brainstem response from surface electrodes. We show in particular that short recordings, down to a few seconds, and a few scalp electrodes suffice for a meaningful decoding of auditory attention.

Neural responses to speech can help to diagnose brain injury 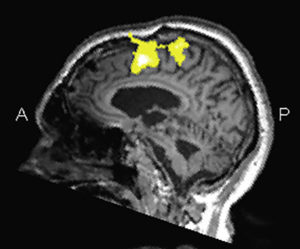 Brain injury such as following traffic or sports accidents can lead to severe disorders, including disorders of consciousness. This disorder is currently diagnosed through behavioural assessments, but this method fails when patients are not able to respond overtly. We investigated whether neural responses to speech as measured from the clinically-applicable EEG can aid to diagnose disorders of consciousness. We focussed on the neural tracking of the speech envelope that can index attention to speech as well as speech comprehension. We find that the latency of the neural envelope tracking related to the severity of the disorder of consciousness: patients in a vegetative state without signs of consciuosness showed neural responses to the speech envelope that were significantly delayed compared to patients that exhibited consciusness.

How we can tune in to a voice in background noise 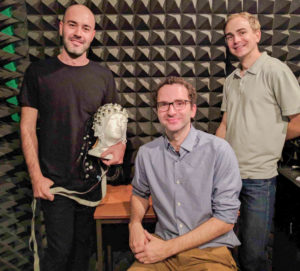 In order to focus on a particular conversation, listeners need to be able to focus on the voice of the speaker they wish to listen to. This process is called selective attention and has been extensively studied within the auditory cortex. However, due to neural feedback from the cortex to lower auditory areas, the auditory brainstem as well as the inner ear, these structures may already actively participate in attending to a particular voice.

We have devised a mathematical method to measure the response of the auditory brainstem to the pitch of natural speech. In a controlled experiment on selective attention, we have then shown that the brainstem responds stronger to the pitch of the voice that a person is listening to than to that of the ignored voice. Our findings demonstrate that the brainstem contributes already actively to selective attention. They also show that the pitch of a voice can be a powerful cue to focus on that voice, which may inspire future speech-recognition technology.